In 1948, Neal Mast immigrated to the United States with his wife Jacoba, their two small children and a baby on the way.  He arrived on Ellis Island with $20 in his pocket and a chest holding all their earthly possessions.   Neal and his family traveled to Grand Rapids, Michigan where his sponsor (a friend of their pastor from the Netherlands) offered to help him get established. 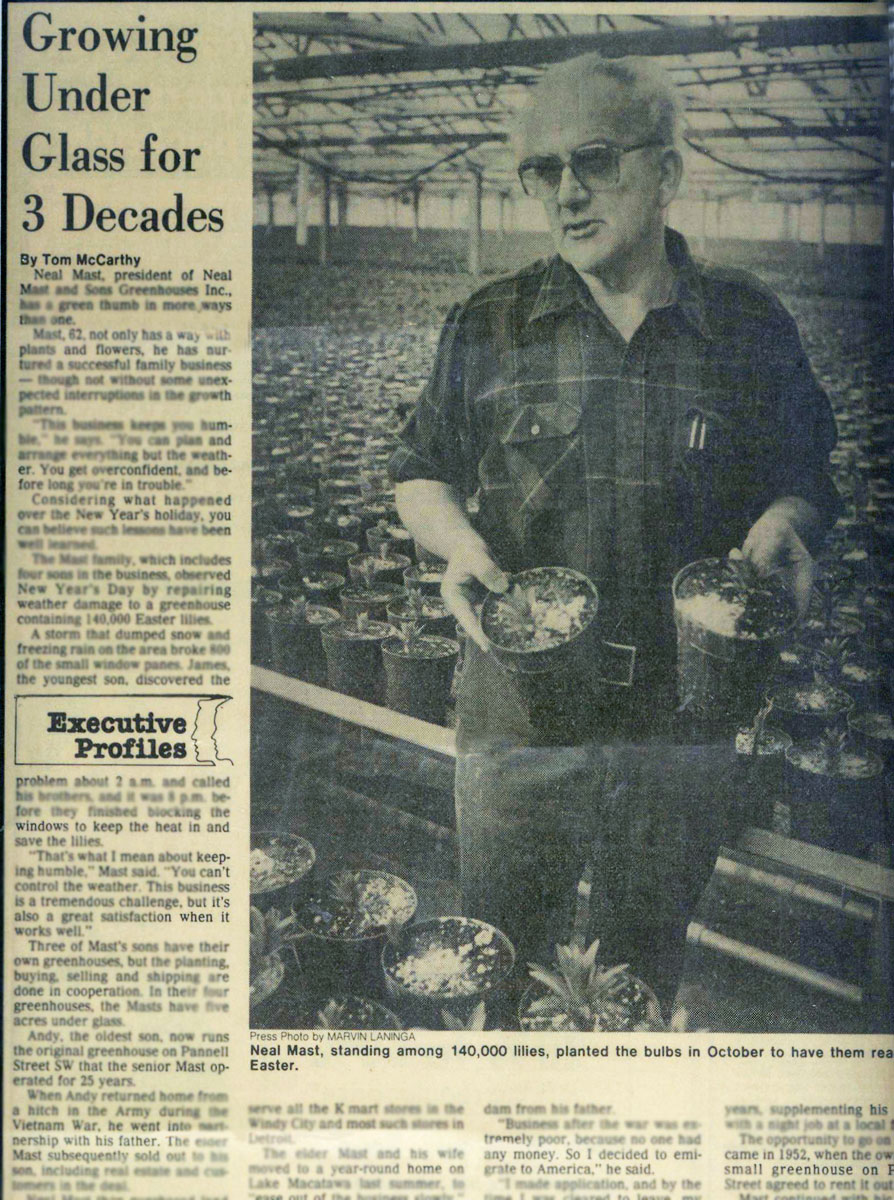 In his first years in the United States, Neal had little interest in the greenhouse business.  He had worked in his father’s greenhouse growing vegetables with his five brothers from the age of six, and he thought in America he would do something more exciting.  He spent his first years in Grand Rapids working odd jobs in foundries and trying to learn English.  Eventually, Neal took a job working for two brothers that were produce growers.  He worked summers in the Upper Peninsula of Michigan growing lettuce, and also helped bring the product to market.

In the early 1950’s, Neal had an opportunity to rent a greenhouse from a gentleman who wanted to keep it running while his son was serving in the National Guard.  Neal would work nights in the foundry and days at the greenhouse.  In the winter, he would run home during breaks at the foundry to shovel coal into the boilers at the greenhouse.  Some of the first flowering plants that Neal grew were cutting geraniums that he would sell to the local cemeteries for Memorial Day.  He would collect the urns in the fall, write the people’s names on them and in the spring return them to the cemetery filled with beautiful geraniums.

In time, Neal quit working in the foundry and was able to make a living working full-time at the greenhouse.  During that time, he and Jacoba had three more boys and one girl, rounding it out to seven children.  His oldest son came into the business and eventually purchased the original greenhouse.  In 1972, Neal started a new greenhouse, with new customers, at our current location on Four Mile Road.

The business has grown over the last 20 years from a sole proprietor to a small corporation. When Jim Mast purchased the business from his father in 1987 there were 10 employees, 120,000 ft of production space growing Poinsettias, Easter Lilies and Seed Geraniums.  We shipped product 10 weeks out of the year and mainly serviced a 5 state area. Our current owner Jim Raterink came on board in 1991 as CFO and now serves as President/CEO.

A lot has changed over the past 20 years and we have been blessed.

We don’t have a crystal ball to predict our future. What we do have is an assembled team of people committed to our future. A motivated team of:  visionaries, analysts, strategists, growers and executers, working together and moving in the same direction. Our continuing success lies in our heritage as world-class growers and in our commitment to our vision:

We've been leading the wholesale plant and flower industry for years. Learn more about our history...